I went to see that Spider-Person film, I enjoyed it, had some nice qualities about it. However I felt it needed more of its own identity from the Raimi films, I had an image of the film being set during Winter, making use of the great imagery that a Snowy New York could have brought to the film. Would have provided some really nice imagery and scenarios.

Also I didnt like the design of Lizard man, mainly his face, I thought he should have lost all ability to communicate and recognize friends, Just been a wild uncontrolled beast.

Also I think Gwen Stacy should have been killed, and Spider-man should have had the shit beat out of him... really make him into a Hero that would of...

Anyway I did a Painting of what I wanted. 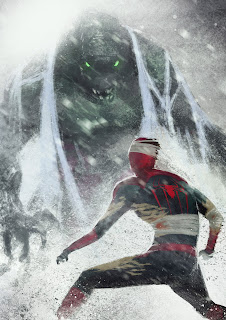